At a live streamed event on Friday, tech tycoon Elon Musk showcased the latest Neuralink technology. The demo starred a pig called Gertrude, which had a coin-sized computer chip implanted into her brain previously. In the webcast Musk summed up the device as “kind of like a Fitbit in your […]

At a live streamed event on Friday, tech tycoon Elon Musk showcased the latest Neuralink technology. The demo starred a pig called Gertrude, which had a coin-sized computer chip implanted into her brain previously. In the webcast Musk summed up the device as “kind of like a Fitbit in your skull with tiny wires”. However, the possibilities of a high-functioning Brain Computer Interface (BCI) could go much further than that catchy snippet hints at, especially for people who have developed neurological problems or impairments. Moreover, Musk hinted that humans might one day need BCIs to stay relevant as computer AI marches onwards.

In July last year HEXUS reported upon Neuralink’s application to start human trials in 2020. No update was given with regard to human testing unfortunately, and no timelines were put forward.

So, what of this latest demonstration? There was a lot of talk about the technology and progress but little to see in the demonstration itself. The new device is a great advancement on what was seen last summer, quite a lot smaller and less cumbersome. The coin sized link is designed to replace a circular piece of skull, so it should sit flush with your head, and could even hide nicely under hair. The device still needs implant wires to connect that are put about an inch or so into the brain.

As well as the tiny wires containing >3000 electrodes, being able to monitor activity of about 1,000 brain neurons, the device includes typical smartwatch type sensors for things like movement, temperature, pressure and so on. Also, thankfully, seeing that slide mentioning “all day battery life,” the device can be charged via induction – no plugging or device removal needed to replenish the battery. 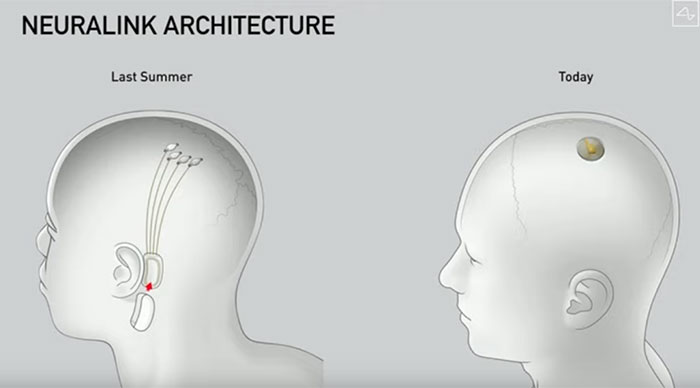 To fit the Neuralink device Musk showed off a robot that is said to be capable of the job. The robot has been used for all implantations thus far but Musk would like its capabilities expanded to envelope the whole of the process from start to finish. 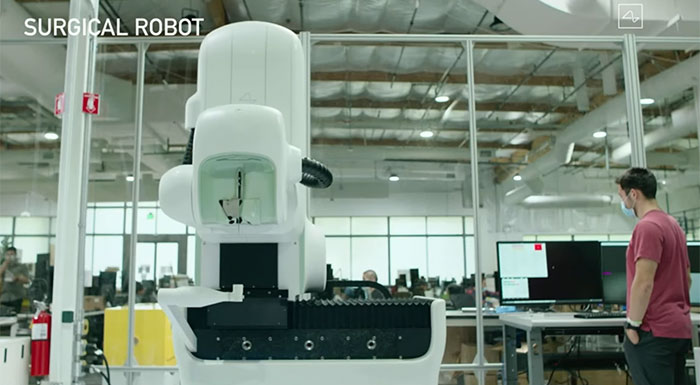 While the tech, its miniaturisation, and the V2 surgical robot might be worthy of acclaim, many scientists and tech commentators were unimpressed by the actual Neuralink demonstration with Gertrude the pig. As the big sniffed straw the sensations showed up on a graph tracking neural activity. How that activity is translated and made use of with the complexities of the human brain seems to be a large step away.

Musk proposes BCI’s in humans being a fix for neurological problems that have lead to memory loss, paralysis, extreme pain and many more conditions but it remains to be seen if this will work out. Thus the MIT Technology Review called the live streamed demonstration a piece of ‘neuroscience theatre’. Similarly Prof Andrew Jackson, Professor of Neural Interfaces, Newcastle University, summed up the demo as showcasing “solid engineering but mediocre neuroscience”. Crucially Jackson pointed out that there is a big difference in recording brain cell activity and ‘reading thoughts’.

What do HEXUS readers think of the new Neuralink Brain Computer Interface and Friday’s demonstration? Would any of you be human trial volunteers?

Mon Sep 21 , 2020
WOODS HOLE, Mass., Aug. 27, 2020 /PRNewswire/ — Scientists have long suspected that ocean acidification is affecting corals’ ability to build their skeletons, but it has been challenging to isolate its effect from that of simultaneous warming ocean temperatures, which also influence coral growth. New research from the Woods Hole […]