On top of this, the government said it would start immigration checks across the entire country, even in states with little to no history of undocumented immigration, and planned to send those who could not prove they were either Indian citizens or eligible for fast-tracking into mass detention camps. In […]

On top of this, the government said it would start immigration checks across the entire country, even in states with little to no history of undocumented immigration, and planned to send those who could not prove they were either Indian citizens or eligible for fast-tracking into mass detention camps. In a country where many poor people don’t have documents to prove that they even exist (according to one report, only 62% of Indian children under the age of five have birth certificates), millions were at risk of failing the check.

The potential consequence for many of India’s 200 million Muslims was clear: they could become stateless people, treated like the Uighur Muslim minority in China. India is a secular republic, but Prime Minister Narendra Modi, an avowed Hindu nationalist who joined a known supremacist group when he was just eight years old, was turning it into a majoritarian Hindu state.

When protests against the CAA took off, the government turned to the tactic it had used elsewhere: shutting off the internet. There were shutdowns in India’s largest state, Uttar Pradesh; in Modi’s home state, Gujarat; and even in Karnataka, whose tech-friendly capital, Bengaluru, is known as the Silicon Valley of India.

As Arora realized the extent of the Delhi shutdown, she worried for her own security as well as for her business. The city was already notoriously unsafe for women, and as the antigovernment protests continued, the khaki-uniformed police had responded to peaceful chants and demonstrations with live rounds, tear gas, and smoke grenades. Across the country the police had already killed 25 protesters.

That day, a prominent march was planned at the historic Red Fort, where India’s prime minister traditionally hoists the flag on Independence Day. In the morning, Nikhil Pahwa, a friend of Arora’s who worked as a digital rights activist, had tweeted, “Telecom operators have confirmed to us: The Internet is being shut down in parts of Delhi. Not sure of which areas. Awaiting update.”

It turned out that not all service operators had made the effort to tell users in advance. Many of the estimated 1.7 million people affected started their day in an information black hole.

The shutdown didn’t cover the entire city—only those areas with a large Muslim population. “The idea was to stop them communicating as they roamed around,” says Danish Khan, a reporter with the Economic Times newspaper. His neighborhood had experienced a blackout that morning. “They didn’t want people to mobilize quickly or share pictures and videos,” he adds.

News of what the government had surreptitiously done only spurred people on. Hundreds of protesters gathered, but many of them were immediately taken into custody. While still standing on the street trying to catch a Wi-Fi signal, Arora thought of the two young Muslim women who worked for her. Would they be safe at home without the internet, or outside where the police roamed? Sometimes, she says, it became difficult to remember that she lived in a democracy.

When the Indian government wants to plunge the public into a digital darkness, all it has to do is invoke one law.

The Indian Telegraph Act of 1885 gives the federal and state governments the right to “prevent the transmission of any telegraphic message or class of messages during a public emergency or in the interest of public safety.” The British created the law and found it a useful tool for stopping uprisings during the colonial era. Later, Indian governments used it to wiretap citizens, including opposition politicians and journalists. In 2017, the law was amended to specify that it allowed “the temporary suspension of telecom services.”

The Software Freedom Law Center (SFLC), a Delhi-based digital rights group, says that there are two official explanations for a shutdown: public safety and public emergency. The government either claims that misinformation circulating on social media and WhatsApp is likely to cause violence, or that an ongoing violent situation can only be brought under control by closing down communications.

Stopping violence was at least sometimes the goal when shutdowns started to increase in 2018. In June that year, two tourists were murdered in the northeastern state of Assam following rumors on WhatsApp of child kidnappers on the prowl. When two more people were beaten the next day, apparently on the same suspicion, the government shut off the state’s internet to stop the rumors from spreading.

Over the next few months, similar messages and fake videos of so-called “child lifters” popped up as WhatsApp forwards in many other states. By the end of 2019, such rumors were linked to at least 70 violent incidents, according to analysis by the data journalism website IndiaSpend.

The episode highlighted a burgeoning epidemic of fake news in India, stoked by a price war in 2016 among phone operators that had slashed the cost of mobile data and brought hundreds of millions of new people online. The internet, which had been the domain of the educated and wealthy, was now everywhere: vegetable vendors streamed Bollywood films as they parceled tomatoes and onions, and auto rickshaw drivers scrolled YouTube videos while they waited for their next customer. Today Indian mobile data is the cheapest in the world, and the average social-­media user spends 17 hours on the platforms each week, more than people in China.

This dramatic expansion exposed the widespread lack of information literacy. The concept of online disinformation is largely unknown to Indians outside major cities, and while WhatsApp has taken steps to limit the spread of fake news, the government continues to deal with it through shutdowns rather than attempting education, investing in computer literacy, or even just using social media to set the record straight.

And increasingly, as the shutdowns in Delhi and elsewhere show, the authorities are now using the tactic not only to curb violence but also to suppress dissent. There is no true legal recourse: the Telegraph Act doesn’t limit how long a shutdown can last, and although there is a committee that reviews such actions, it is staffed by bureaucrats and rarely diverges from the government line.

Telecom companies themselves are badly affected by shutdowns: one estimate says they lost $350,000 every hour that the internet was down during the 2019 protests. However, they offer virtually no resistance to the state. One company, Airtel, even went back and deleted tweets in which it had informed customers of the Delhi shutdown.

Even the courts respond halfheartedly. When the SFLC filed a writ arguing that the Delhi shutdown violated fundamental rights to freedom of speech and life, the case was dismissed on the grounds that the shutdown had already been lifted. In January of this year, the Supreme Court declared the Kashmir blackout illegal, but when the government switched communications back on it kept the internet throttled to unusable speeds, and faced no consequences.

Berhan Taye, a senior policy analyst at the digital rights nonprofit Access Now, says there is “a direct correlation between shutdowns and human rights violations.”

In Kashmir, even now, it’s difficult to say exactly how many people were detained during the months-long blackout. The government’s own figures say there were 5,116 “preventive arrests,” but campaigners do not believe this accounts for everybody. In Uttar Pradesh, the police arrested more than 100 people in just a single day of protests in January and beat some brutally in public view. Without the internet, however, it was difficult to get the news out.

Jan Rydzak, a research analyst at the human rights nonprofit Ranking Digital Rights, says it’s important that people continue to protest government excesses. “We have to keep showing that shutdowns aren’t effective for the government’s purposes,” he says. Otherwise, he warns, they could begin to cascade. First, other democracies in the region may formalize systems to close off the internet rather than rely on broad public safety laws. Then, as such tactics spread, the balance around the world could shift. Instead of one or two blackouts globally, there could be prolonged siege-like blockades, and “a continuous stream of ephemeral shutdowns that will never end.”

This year, the pandemic has slowed the rate of shutdowns—but it has not stopped them. The Indian government has already shut off the internet on 35 separate occasions, 26 of them in Kashmir. Even as the number of confirmed covid-19 cases in Jammu and Kashmir crossed 13,000 and the death toll passed 200 in mid-July, the government refused to restore 4G internet speeds. In May, the Supreme Court referred a judgment on a petition calling for the restoration of full service to a committee of government-appointed officials—in essence asking the government to decide whether or not its own actions were lawful. To no one’s surprise, the committee said the current 2G speed doesn’t “pose any hindrance to Covid-19 control measures.”

Akhtar, the doctor in Srinagar, disagrees. On May 19, around two months into the pandemic, he stepped out of the operating theater and reached for his mobile phone, only to realize that he couldn’t load his emails. He immediately understood that the city was in the midst of another internet shutdown.

Usually he would call around to see if anyone knew what was going on. This time, however, even making a phone call was impossible. It turned out that security personnel had shot dead two suspected militants in downtown Srinagar, and the government had turned off all connectivity to prevent the news from circulating and protesters from gathering.

Standing in his scrubs, Akhtar had no idea when, or if, he would get back on the grid.

Since the start of the pandemic he had felt handicapped, almost entirely reliant on others to give him health-care updates. He didn’t have the latest research. Now, even his phone was useless. The world was in the middle of one deadly crisis, but faced with everyday violence, surrounded by security forces, and cut off from sources of information, it seemed to Akhtar that Kashmir was in the middle of two.

Tue Aug 25 , 2020
LUKA. DONCIC. The Dallas Mavericks All-Star guard was listed as a game time decision for Game 4 after spraining his ankle in the team’s Game 3 loss to the LA Clippers. With the fear of going down 3-1 in the series, Doncic battled through the pain to try and even […] 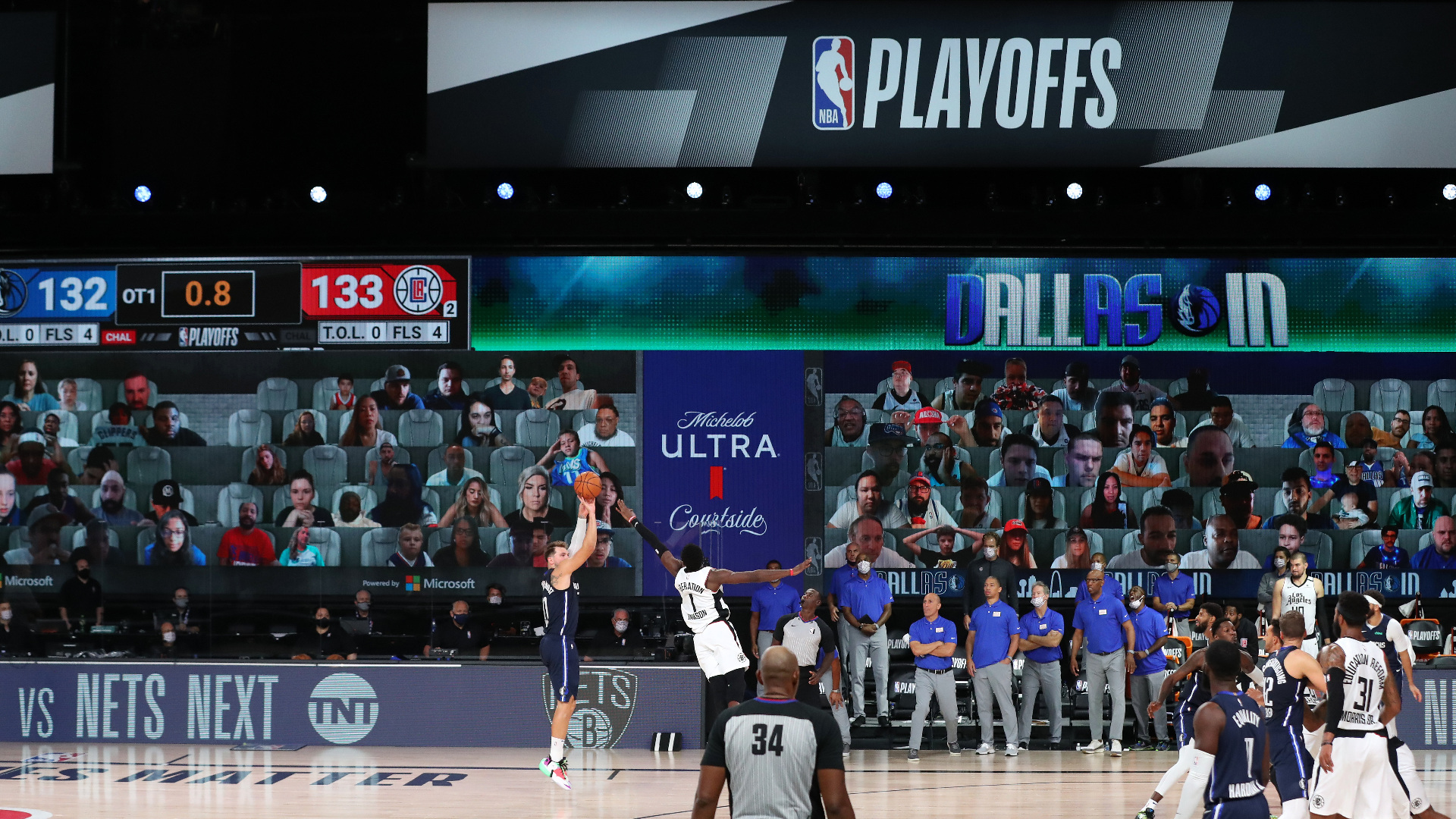