The U.S. Army, Navy and Air Force each have their own secure information-sharing combat network technology programs. But what if those programs were combined? Why not merge them into one multi-domain military network able to optimize and combine coordinated land, sea and air attacks?  The question represents current Pentagon thinking […]

The U.S. Army, Navy and Air Force each have their own secure information-sharing combat network technology programs. But what if those programs were combined? Why not merge them into one multi-domain military network able to optimize and combine coordinated land, sea and air attacks?

The question represents current Pentagon thinking on the evolution of a program called Joint All Domain Command and Control (JADC2), a technical initiative aimed at making sure otherwise disparate or segmented service combat systems are fully interoperable.

Perhaps a fighter jet comes across a large enemy mechanized combat formation approaching a port filled with enemy surface ships? Perhaps those ships are connected to enemy destroyers miles off the coast getting in position to fire upon U.S. armies? How would air, sea and land intelligence networks and information sharing technologies operate in unison?

This question forms the heart of a long-standing Pentagon challenge geared toward ensuring all domains can operate in tandem during joint, multi-domain war.

“JADC2 is not just for the Air Force but the entire Department. We need to get the right software to the cloud to network and connect the force. How do I connect the force and build this internet of things to allow every platform to connect with every other platform?” Wilson asked, during a video interview with The Mitchell Institute for Aerospace Studies.

NIFC-CA encompasses the mission aims of JADC2 because it integrates ship-based radar sensors with an aerial surveillance node such as an F-35 to detect approaching anti-ship cruise missiles from beyond the horizon, and cue a ship-fired SM-6 missile with plenty of time to track and intercept the threat.

The Army, Wilson explained, is progressing with a netted or “meshed” sensor system intended to track and take out approaching enemy threats across vast distances. While developed as an Army system to connect sentinel radar, Patriot missile interceptors and other weapons on a single networking system, the service’s Integrated Air and Missile Defense Battle Command System is multi-domain in scope.

“IBCS is really the main Army part of JADC2. It is a pathfinder to that,” General John Murray, Commanding General of Army Futures Command, told reporters.

“I want the Army system to feed information back up into the F-35. The F-35 is a flying computer,” Wilson said.

The aim of JADC2, which fundamentally seeks to shorten sensor-to-shooter time and enable secure, yet ubiquitous sharing of combat crucial information in war, is to combine the functionality and operations of these Army, Navy and Air Force systems into one.

Kris Osborn is Defense Editor for the National Interest. Osborn previously served at the Pentagon as a Highly Qualified Expert with the Office of the Assistant Secretary of the Army—Acquisition, Logistics & Technology. Osborn has also worked as an anchor and on-air military specialist at national TV networks. He has appeared as a guest military expert on Fox News, MSNBC, The Military Channel, and The History Channel. He also has a Masters Degree in Comparative Literature from Columbia University.

Tue Aug 25 , 2020
Democratic senator Tom Carper was caught on a hot mic uttering a string of profanities during the Senate’s remote questioning of Postmaster General Louis DeJoy Friday morning. Because of the coronavirus pandemic and the current Senate recess, DeJoy, a Republican fundraiser, fielded questions about the United States Postal Service’s financial […] 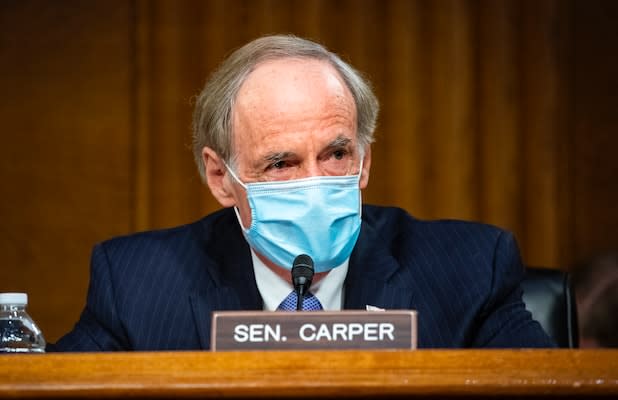