One “pitch-black night” in 2015, Markus Reymann, co-founder and director of the ocean-conservation non-profit TBA21–Academy, and eminent marine biologist David Gruber were diving in the Solomon Islands. “I was really nervous,” recalls Reymann. Diving after dark, “there could be sharks… or saltwater crocodiles.” But the conditions – “no moon, no […]

One “pitch-black night” in 2015, Markus Reymann, co-founder and director of the ocean-conservation non-profit TBA21–Academy, and eminent marine biologist David Gruber were diving in the Solomon Islands. “I was really nervous,” recalls Reymann. Diving after dark, “there could be sharks… or saltwater crocodiles.” But the conditions – “no moon, no clouds, water like a mirror” – were perfect for photographing biofluorescence. “We dropped down and turned on the camera lights, and all of a sudden…” they encountered something neither had ever imagined. “This hawksbill turtle floated into the beam and lit up,” its shell a riot of fluorescent red, green and black markings. “We could not believe what we were seeing.” Although biofluorescence had been observed in corals, jellyfish and fish, it had never been seen, let alone filmed, in a reptile. The sum of scientific knowledge had been added to.

Two years later, Reymann introduced Gruber to the artist Joan Jonas, whose work had featured footage shot in aquariums. “I had an inkling they would like each other,” he says, and a collaboration ensued that fed into Jonas’ 2019 exhibition Moving Off the Land II. Sculptures, drawings and sound and video works inspired by the ocean and dangers posed to it, not least by algal blooms and overfishing, were shown at TBA21–Academy’s just-opened Ocean Space, in the 16th-century church of San Lorenzo in Venice, where they were seen by more than 50,000 people. From there it went to the Museo Nacional Thyssen-Bornemisza in Madrid (until 13 September). Its final incarnation sees works that informed and inspired the show presented on Ocean-Archive.org, the foundation’s new educational digital platform.

“Artists are fantastic agents of change who can bring everybody together,” says Reymann. Hence the idea of an exhibition space, where art aficionados might be inspired to think about the state of the world’s oceans, and the dangers posed by overfishing, pollution, acidification, climate change and, pertinently for Venice, rising sea levels.

Head west across Campo San Lorenzo in Castello and your eye cannot fail to be caught by the line of light that shines on the brick façade of its eponymous church, which indicates how high the waters threaten to rise in the next century – 4.5m. It’s a danger that feels imminent: last November the winter flooding, or acqua alta, reached a height of 1.87m, the second highest on record, and even this June, San Marco was flooded to a depth of over a metre.

That light installation is the work of the architects Territorial Agency, whose exhibition Oceans in Transformation was scheduled to open last week. For the show, they created a 30-channel video installation that was inspired initially by the environmental impact of the oil industry – but during the course of its creation diversified to include a raft of marine issues. It’s an exhibition that lives up to the Academy’s ambitions to foster “interdisciplinary research, catalyse engagement, stimulate new knowledge and inspire artistic production”. Nearly 10 years after Reymann co-founded the Academy with the collector, philanthropist and keen diver Francesca Thyssen-Bornemisza, its objectives sustain its urgency. 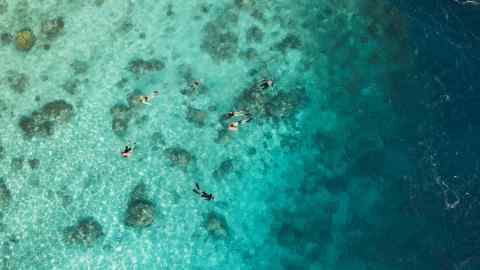 “In the beginning, everyone said we were absolutely crazy,” says Reymann. And glancing at some of their projects, one can see why. Take Treasure of Lima, its name a nod to the haul of gold and jewels removed and lost from the Peruvian capital in 1820. It involved the burial of works by 40 artists, among them Marina Abramović, Olafur Eliasson and Ed Ruscha, in a secret location on Costa Rica’s remote, largely uninhabited Cocos Island. Its GPS coordinates were then turned into an 8,600-figure code printed onto a steel scroll, which was auctioned at Phillips for $185,000. The sum went towards setting up a conservation project on the island with local researchers, who were able to tag and track 25 sharks, establishing that they migrate as far as the Galápagos. “The science that came out of it was extraordinary,” says Reymann. “And it gave a lot of visibility” to the valuable work of Costa Rica’s national parks authority, raising global awareness of illegal shark fishing in the area.

It isn’t simply science that the Academy hopes to advance through art, but technology too. Last year in Jamaica, Swiss artist Claudia Comte worked with Nathaniel Petre, a post-PhD researcher from the Dyson School of Design Engineering at Imperial College London, to create sculptures 3D-printed from repurposed waste, including sargassum. It proved unstable, but three alternatives were submerged to a depth of 10m in the sea off Portland, on which it is hoped coral will begin to seed.

This year there’s been less exotic travel for Reymann, but no less intellectual exploration. Wise to the fact that flying and time spent on yachts make for “carbon-heavy if very immersive encounters”, much of the Academy’s work has moved online. And in an effort to “rally support” from other like-minded donors, this time last year it seeded the Ocean Academy Fund, managed by the privately owned Swiss bank Lombard Odier’s Fondation Philanthropia.

As Reymann puts it: “We’re about asking open-ended questions that sometimes lead us to places we never imagined. The oceans cover 72 per cent of our planet. They support 80 per cent of all life, produce more than half the oxygen we breathe and absorb half the CO2 we produce. Yet we still know so little about them.”

Wed Sep 9 , 2020
Phoenix, AZ – A swimming pool is more than just an aesthetic addition to a property. Swimming pools have been known to add to its value, whether residential or commercial, while also boosting the quality of life of the residents and users of such a property. At Phoenix Pool Builders, […]