Like spirits passing between worlds, billions of invisible beings rise to meet the starlight, then descend into darkness at sunrise. Microscopic plankton’s daily journey between the ocean’s depths and surface holds the key to understanding crucial planetary processes, but has remained largely a mystery until now. A new Stanford-developed rotating […]

Like spirits passing between worlds, billions of invisible beings rise to meet the starlight, then descend into darkness at sunrise. Microscopic plankton’s daily journey between the ocean’s depths and surface holds the key to understanding crucial planetary processes, but has remained largely a mystery until now. A new Stanford-developed rotating microscope, outlined in a study published Aug. 17 in Nature Methods, offers for the first time a way to track and measure these enigmatic microorganisms’ behaviors and molecular processes as they undertake on their daily vertical migrations.

Go to the web site to view the video.

Marine microorganisms often travel extreme vertical distances, but studying such behaviors has been limited by a lack of available technology. Now, a team of Stanford researchers has created the “gravity machine,” a microscope that tracks organisms in a rotating fluid-filled wheel, simulating an infinite vertical distance.

“This is a completely new way of studying life in the ocean,” said study first author Deepak Krishnamurthy, a mechanical engineering PhD student at Stanford.

The innovation could provide a new window into the secret life of ocean organisms and ecosystems, said study senior author Manu Prakash, associate professor of bioengineering at Stanford. “It opens scientific possibilities we had only dreamed of until now.”

On Earth, half of all the conversion of carbon to organic compounds occurs in the ocean, with plankton doing most of that work. The tiny creatures’ outsized role in this process, known as carbon fixation, and other important planetary cycles has been hard to study in the ocean’s vertically stratified landscape which involves vast depth and time scales. 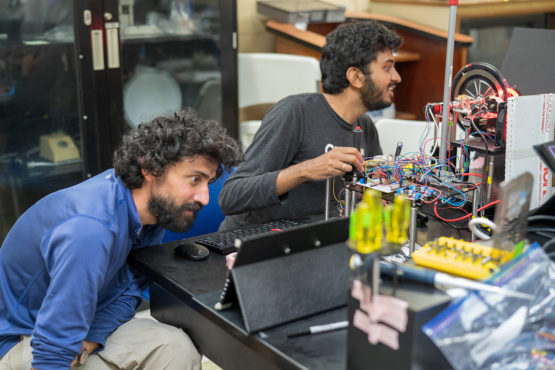 Stanford researchers Manu Prakash and Deepak Krishnamurthy use a rotating microscope that they developed to observe for the first time a single-cell diatom, a type of plankton, as it changes its density to move through water. (Image credit: Hongquan Li)

Conventional approaches to sampling plankton are focused on large populations of the microorganisms and have typically lacked the resolution to measure behaviors and processes of individual plankton over ecological scales. As a result, we know very little about microscale biological and molecular processes in the ocean, such as how plankton sense and regulate their depth or even how they can remain suspended in the water column despite having no appendages that aid in mobility.

“I could attach a tag to a whale and see where it goes, but as things get smaller and smaller it becomes extremely difficult to know and understand their native behavior,” Prakash said. “How do we get closer to the native behavior of a microscopic object, and give it the freedom that it deserves because the ocean is so large a space and extremely vertically oriented?”

To bridge the gap, Prakash and researchers in his lab developed a vertical tracking microscope based on what they call a “hydrodynamic treadmill.” The idea involves a simple yet elegant insight: a circular geometry provides an infinite water column ring that can be used to simulate ocean depths. Organisms injected into this fluid-filled circular chamber move about freely as the device tracks them and rotates to accommodate their motion. A camera feeds full-resolution color images of the plankton and other microscopic marine critters into a computer for closed-loop feedback control. The device can also recreate depth characteristics in the ocean, such as light intensity, creating what the researchers call a “virtual reality environment” for single cells.

The team has deployed the instrument for field testing at Stanford’s Hopkins Marine Station in Monterey, in Puerto Rico and also on a research vessel off the coast of Hawaii. The innovative microscope has already revealed various microorganisms’ behaviors previously unknown to science. For example, it exposed in minute detail how larvae of marine creatures from the Californian coast, such as the bat star, sea cucumber and Pacific sand dollar employ various methods to move through the sea, ranging from a steady hover to frequent changes in ciliary beat and swimming motion or blinks. This could allow scientists to better understand dispersal properties of these unique organisms in the open ocean. The device has also revealed the vertical swimming behaviors of single-celled organisms such as marine dinoflagellates, which could allow scientists to link these behaviors to ecological phenomena such as algal blooms.

In Puerto Rico, Krishnamurthy and Prakash were shocked to observe a diatom, a microorganism with no swimming appendages, repeatedly change its own density to drop and rise in the water – a puzzling behavior that still remains a mystery.

“It’s as if someone told you a stone could float and then sink and then float again,” Krishnamurthy said.

Bringing the ocean to the lab 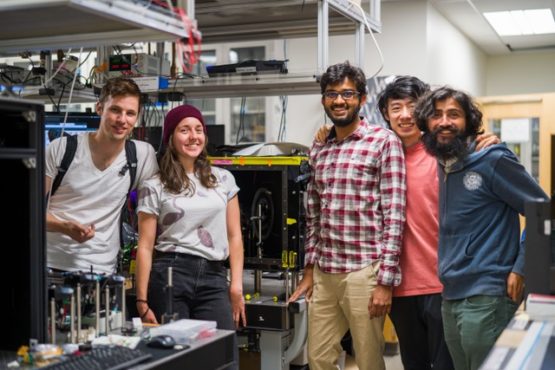 Prakash credit the device’s success to the interdisciplinary nature of his lab’s team, which includes electrical, mechanical and optical engineers, as well as computer scientists, physicists, cell biologists, ecologists and biochemists. The team is working to extend the microscope’s capabilities further by virtually mapping all aspects of the physical parameters that an organism experiences as it dives into depths of the ocean, including environmental and chemical cues and hydrostatic pressure.

“To truly understand biological processes at play in the ocean at smallest length scales, we are excited to both bring a piece of the ocean to the lab, and simultaneously bring a little piece of the lab to the ocean,” said Prakash.

For more details about the project, visit www.gravitymachine.org.

Prakash is also a senior fellow at the Stanford Woods Institute for the Environment; a member of Bio-X, the Maternal & Child Health Research Institute and the Wu Tsai Neurosciences Institute; a faculty fellow at the Howard Hughes Medical Institute; and an investigator at the Chan Zuckerberg Biohub.

Portions of the technology described here are part of a pending U.S. patent.

To read all stories about Stanford science, subscribe to the biweekly Stanford Science Digest.