Subscribe: Stay in the know with a 99-cent subscription to the RGJ 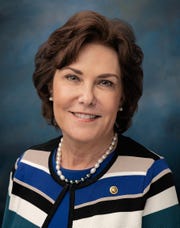 This opinion column was submitted by Sen. Jacky Rosen (D-Nevada).

Neither rain, nor sleet, nor global pandemic can stop the men and women of the United States Postal Service. However, recently one man has worked to stop the mail in its tracks. Postmaster General Louis DeJoy assumed his position in mid-June, and in just a few short months, Americans have reported nationwide delays in mail delivery.

During a recent Senate hearing, I questioned the postmaster general about his destructive policy changes. Mr. DeJoy restructured USPS leadership, reduced overtime, removed — and in some cases threw away — mail sorting equipment, and eliminated transportation trips needed for on-time deliveries.

Specifically, I asked Postmaster General DeJoy if he had conducted any analysis on the impact his ill-conceived policy changes would have on Americans who rely on timely mail delivery such as our seniors, veterans, servicemembers and working families. During the hearing, Mr. DeJoy refused to provide information, and he has yet to comply with my request for transparency.

The postmaster general’s refusal is a serious matter. The United States Postal Service plays a critical role in Nevadans’ lives and the lives of all Americans.

Nevada is home to more than 225,000 veterans, many of whom are employed by the Postal Service. Countless more rely on it for the timely delivery of critical medications, with the Department of Veterans Affairs using USPS to deliver close to 80 percent of the prescription drugs it sends through the mail.

Not to mention, we have an election quickly approaching where many Americans plan to vote by mail, making timely mail delivery critical for our democracy.

To put it simply, for many Americans, the Postal Service is a lifeline. Under Postmaster General DeJoy’s shocking mismanagement, we have seen an attempt to cut that critical lifeline.

More: Many small businesses rely on the US Postal Service to compete, stay afloat

As a former computer programmer and systems analyst, I have a strong appreciation for data and what it can tell us about the policies we choose to implement. With this in mind, I asked Mr. DeJoy for the data behind the harmful operational changes he made. Instead of open access and transparent answers, Mr. DeJoy gave vague responses and didn’t seem to know if he had conducted any analysis at all.

Moreover, while Mr. DeJoy begrudgingly acknowledged that there have been delays, he refused to concede that his policy changes had led to systemic issues. We know this is not true.

The day before the hearing, I held a roundtable with Nevada postal workers, and what Mr. DeJoy said under oath does not match up with what our postal workers see happening. At best, Mr. DeJoy has no idea what’s happening in the agency he oversees, and at worst, he is actively concealing the truth.

As of yet, Mr. DeJoy has still not provided my office or the committee with the requested materials needed to understand his actions, and ultimately, correct them. This lack of transparency is deeply alarming, and I urge Mr. DeJoy to provide these materials — including those related to what he knew about the potential impact of his changes on seniors, veterans, servicemembers and working families — immediately.

The American people need more than answers, though; we need action. We need Mr. DeJoy to repair the damage he has done and ensure that these destructive policies never return.

During the hearing, I asked Mr. DeJoy to look into the camera, look me in the eye, look every Nevadan, and every American watching in the eye, and commit to ending his policies that are harming seniors, veterans and small businesses in Nevada. The best response he could muster was that he would try to work toward on-time delivery. The American people who rely on the Postal Service need Mr. DeJoy to do more than just try, they need him to act; and if he won’t, then Congress must.

Have your say: How to submit an opinion column or letter to the editor